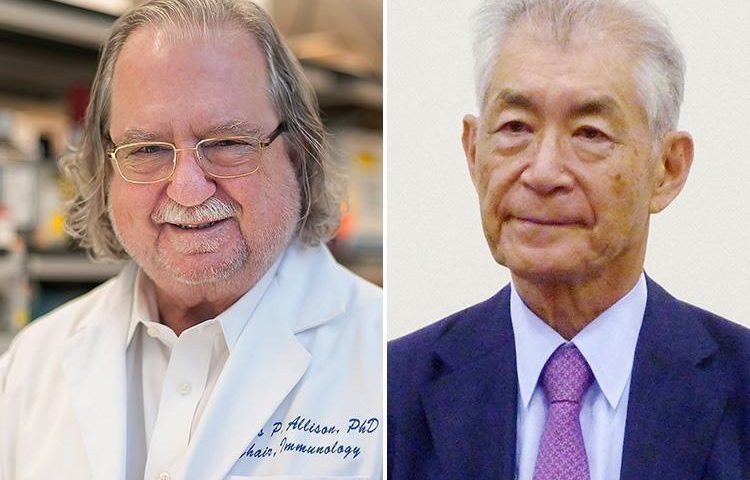 The American James Allison and the Japanese Tasuku Honjo have won the Nobel Prize for Medicine 2018. The jury of the Karolinska Institute in Stockholm has awarded the prize to these two scientists for “their discovery of cancer therapy by inhibiting negative immune regulation ”
The findings of both scientists have been essential for the development of immunotherapy against tumors. “This year’s prize is a milestone in the fight against cancer,” said the institute, “and the discovery made by the two winners takes advantage of the immune system’s ability to attack cancer cells.”
The award is a new proof of the importance of basic research. James Allison, 70, is a researcher at the MD Anderson Cancer Center in Houston (USA). This immunologist studied a protein called CTLA-4 that works as a brake on the immune system.
The researcher understood that removing that barrier could cause the defenses to attack the tumors and the idea was embodied in a new strategy to treat patients with antibodies that inhibit that protein. Allison has acknowledged that her goal was not to fight tumors, but to better understand how white blood cells work.
The results of his work were the pillar of ipilimumab, the first cancer drug against metastatic melanoma, approved in 2011 after 10 years of clinical trials. Allison received last year the Frontiers of Knowledge Award in Biomedicine awarded by the BBVA Foundation.
They have allowed to create effective treatments against lung, kidney, skin and lymphoma cancer
Honjo, 76 years old and linked to Kyoto University since 1984, discovered PD-1, a protein of the cells of the immune system that also prevents them from attacking tumors. The therapies based on this second molecule have been shown to be “surprisingly effective in the fight against cancer,” according to the Nobel Assembly. The antibodies against PD-1 are more effective than those directed against CTLA-4 and have allowed to create effective treatments against lung, kidney, skin and lymphoma cancer. The combination of both antibodies increases the effectiveness of immunotherapy as demonstrated in people with melanoma.
“For more than 100 years, scientists have been trying to recruit the immune system to fight cancer.” Even the two discoveries of the two award-winners, clinical progress was modest, point-of-control inhibitor therapy has revolutionized the treatment of cancer and has changed forever our vision about this disease “, highlights the press release issued by the assembly that awards the award.
Ignacio Melero, oncologist at the University of Navarra, highlights the “enormous contribution” that both prizewinners have made for the development of new therapies. “I was fortunate to start trials of an anti-PD-1 antibody in hepatocellular carcinoma [liver cancer] in Spain and this led to it now being the second-line treatment,” he points out. For Melero this Nobel leaves “a bittersweet feeling,” as other researchers “deserved it”, including Lieping Chen of Yale University and Gordon Freeman of Harvard. “They have stayed out probably because the prize can only be recognize a maximum of three people, “he says.
Since its creation in 1901, 216 Nobel Prizes have been awarded for Medicine, of which only 12 have been awarded to women (5% of the total). The Nobel Prize in Science (Medicine, Physics and Chemistry) has awarded 18 times to women (3%) and 583 to men (97%).
Last year they won the Jeffrey Hall Award, Michael Rosbash and Michael Young “for their discoveries of the molecular mechanisms that control the circadian rhythm.” Thanks in part to his work, today it is known that living beings carry in their cells an internal clock synchronized with the 24-hour returns that the planet Earth gives.
The Medicine award opens the round of announcements of these awards, which will follow on Tuesday the Physics, on Wednesday the Chemistry, on Thursday the Peace and finally Economy, which will be released on Monday of next week . The award is endowed with nine million Swedish crowns, about 940,000 euros.